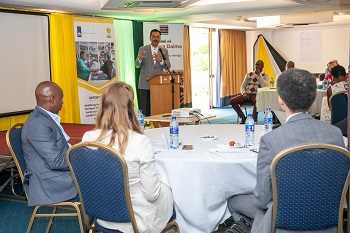 On 23rd March 2022, TAABCO, through Mr. Alvin Andanje, participated in the launch of a report detailing the role of private sector in peace-building at Heron Portico Hotel. The peace and conflict report, titled Mobilising the private sector for peace: The role of private sector actors in peace and conflict dynamics in Kenya and Somalia, is intended as a contribution to the development of policy and peace-building strategies involving the private sector in the Horn of Africa. The report is based on a Peace and Conflict Analysis (PCA) conducted in Kenya and Somalia by International Alert, with support from the Dutch Ministry of Foreign Affairs.

The report will be of interest to international donor agencies, local and international peacebuilders, and their partners working in the Horn. It may also be understood as a contribution to understanding the role of the private sector in fragile and conflict-affected settings more broadly, and it may therefore be of interest to actors concerned with these issues in other regions.

Senior Project Officer-International Alert, Mr Franklin Opuko explained that the policy research was conducted in Nairobi, Turkana and West Pokot as well as virtually with Mogadishu respondents. Sharing key findings, he noted that the private sector has engaged in a range of activities intended to build peace or support peace agreements or negotiations. This has happened in several ways including providing logistical and financial support to peace negotiations as well as directly participating in mediation of warring parties giving the example how the Turkana Chamber of commerce helped negotiate for a peace corridor between the Pokot and Turkana. Public campaigns like Mkenya Daima, Mr Franklin added, have also aided in violence prevention efforts.

Of concern, Mr Franklin also noted that there is ample evidence of private sector engaging directly in activities that are violent, or that drive and/or sustain conflict and violence. This, he noted, includes participating in bribery and extortion as well as engaging or inciting others to violence for commercial advantage in the market place. Others, he said, participate in value chains that depend at least in part on violence while others occupy economic niches created by conflict. Some of the recommendations for the business community the policy brief recommends include:

In fragile contexts such as Somalia, business actors operate largely without coordination which weakens their capacity to safeguard their legitimate interests and contribute for peace and stability. Therefore, business actors should consider opportunities to establish networks or associations to better organise the sector and improve coordination to raise collective voices in support of a business-conducive environment.